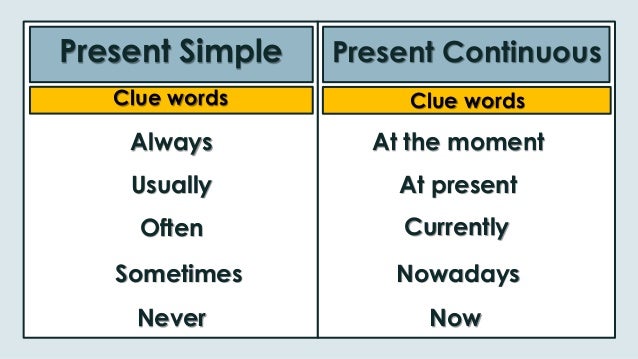 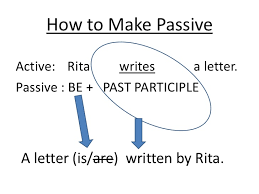 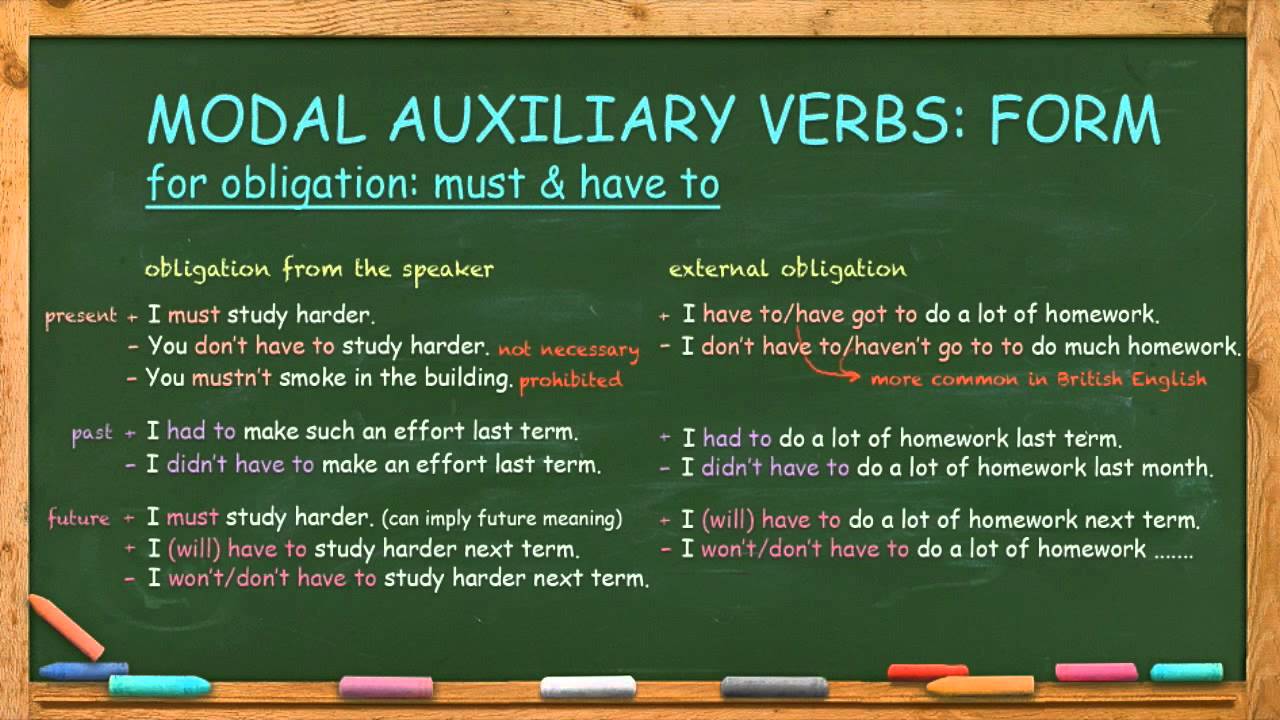 USE 2 Longer Actions in Progress Now

In English, “now” can mean: this second, today, this month, this year, this century, and so on. Sometimes, we use the Present Continuous to say that we are in the process of doing a longer action which is in progress; however, we might not be doing it at this exact second.

Examples: (All of these sentences can be said while eating dinner in a restaurant.)

Sometimes, speakers use the Present Continuous to indicate that something will or will not happen in the near future.

USE 4 Repetition and Irritation with “Always”

The examples below show the placement for grammar adverbs such as: always, only, never, ever, still, just, etc.

Verbs are also said to be either active (The executive committee approved the new policy) or passive (The new policy was approved by the executive committee) in voice. In the active voice, the subject and verb relationship is straightforward: the subject is a be-er or a do-er and the verb moves the sentence along. In the passive voice, the subject of the sentence is neither a do-er or a be-er, but is acted upon by some other agent or by something unnamed (The new policy was approved). Computerized grammar checkers can pick out a passive voice construction from miles away and ask you to revise it to a more active construction. There is nothing inherently wrong with the passive voice, but if you can say the same thing in the active mode, do so (see exceptions below). Your text will have more pizzazz as a result, since passive verb constructions tend to lie about in their pajamas and avoid actual work.

We find an overabundance of the passive voice in sentences created by self-protective business interests, magniloquent educators, and bombastic military writers (who must get weary of this accusation), who

use the passive voice to avoid responsibility for actions taken. Thus “Cigarette ads were designed to appeal especially to children” places the burden on the ads — as opposed to “We designed the cigarette ads to appeal especially to children,” in which “we” accepts responsibility. At a White House press briefing we might hear that “The President was advised that certain members of Congress were being audited” rather than “The Head of the Internal Revenue service advised the President that her agency was auditing certain members of Congress” because the passive construction avoids responsibility for advising and for auditing. One further caution about the passive voice: we should not mix active and passive constructions in the same sentence: “The executive committee approved the new policy, and the calendar for next year’s meetings was revised” should be recast as “The executive committee approved the new policy and revised the calendar for next year’s meeting.”

Take the quiz (below) as an exercise in recognizing and changing passive verbs.

The passive voice does exist for a reason, however, and its presence is not always to be despised. The passive is particularly useful (even recommended) in two situations:

The passive voice is especially helpful (and even regarded as mandatory) in scientific or technical writing or lab reports, where the actor is not really important but the process or principle being described is of ultimate importance. Instead of writing “I poured 20 cc of acid into the beaker,” we would write “Twenty cc of acid is/was poured into the beaker.” The passive voice is also useful when describing, say, a mechanical process in which the details of process are much more important than anyone’s taking responsibility for the action: “The first coat of primer paint is applied immediately after the acid rinse.”

We use the passive voice to good effect in a paragraph in which we wish to shift emphasis from what was the object in a first sentence to what becomes the subject in subsequent sentences.

The executive committee approved an entirely new policy for dealing with academic suspension and withdrawal. The policyhad been written by a subcommittee on student behavior. If students withdraw from course work before suspension can take effect, the policy states, a mark of “IW” . . . .

The paragraph is clearly about this new policy so it is appropriate that policy move from being the object in the first sentence to being the subject of the second sentence. The passive voice allows for this transition.†

The passive forms of a verb are created by combining a form of the “to be verb” with the past participle of the main verb. Other helping verbs are also sometimes present: “The measure could have been killed in committee.” The passive can be used, also, in various tenses. Let’s take a look at the passive forms of “design.”

Only transitive verbs (those that take objects) can be transformed into passive constructions. Furthermore, active sentences containing certain verbs cannot be transformed into passive structures. To have is the most important of these verbs. We can say “He has a new car,” but we cannot say “A new car is had by him.” We can say “Josefina lacked finesse,” but we cannot say “Finesse was lacked.” Here is a brief list of such verbs*:

The same is true of passive gerunds.

With passive participles, part of the passive construction is often omitted, the result being a simple modifying participial phrase. 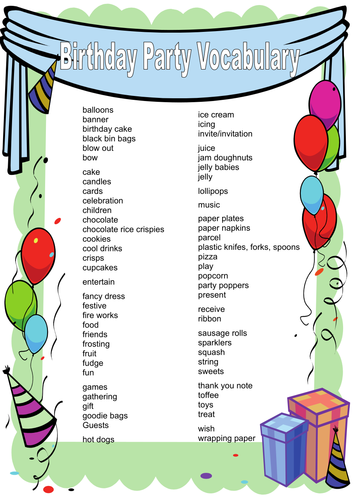 Following a verb which refers to the senses (e.g. see or seem, taste, feel, sound), be sure to use an adjective to describe the noun in the clause, instead of an adverb.

She felt badly about her behavior last evening.

Badly is an adverb, which shouldn’t be used after felt.

She felt bad about her behavior last evening.

The house appears sound, but it hasn’t been inspected yet.

The house appears soundly, but it hasn’t been inspected yet.

Exception: When using the verb to look to mean to see with one’s eyes, as opposed toto seem or to appear, use an adverb to describe the verb.

I looked quickly at the man’s face.

The verb to look is used to mean to see with one’s eyes, and so an adverb is used.

I looked terrible after the long ordeal.

The verb to look is used to mean to appear or to seem, so an adjective is used.

Verbs of the senses

There are six verbs of the senses:

These verbs are very important because of how often they are used. Normally, when using a verb of the senses, we place an adjective after the verb, instead of an adverb.

“Those earrings look expensive, are they real platinum?”

See in the example, the verb “look” is followed by the adjective “expensive”. Let’s look at some more examples:

“That drawing looks great on the wall, do you like it?”

“I think the milk is off, it tastes horrible”

“Oliver feels lonely, because he doesn’t know anyone”

“Can you smell that? It smells delicious! I think Fiona is making a cake”

How to use “of” with taste and smell

The verbs “taste” and “smell” can also be followed by “of” and a noun.

“It smells of flowers in here, did you buy roses for me?”

“Can you taste that? This tea tastes of mint”

How to use “like” with verbs of the senses

We can use “like” to make comparisons. Let’s see some examples:

“That icecream tastes like the one we bought in Italy”

“Oh no! It feels like I’m getting a cold”

“Can you hear that? It sounds like the neighbour is playing his guitar again”

“To feel” means to experience a particular emotion or physical sensation. The expression “feel like” is used a lot in English and it means to want to do something.

“To feel like” is also used when we have a sensation or an impression of something. 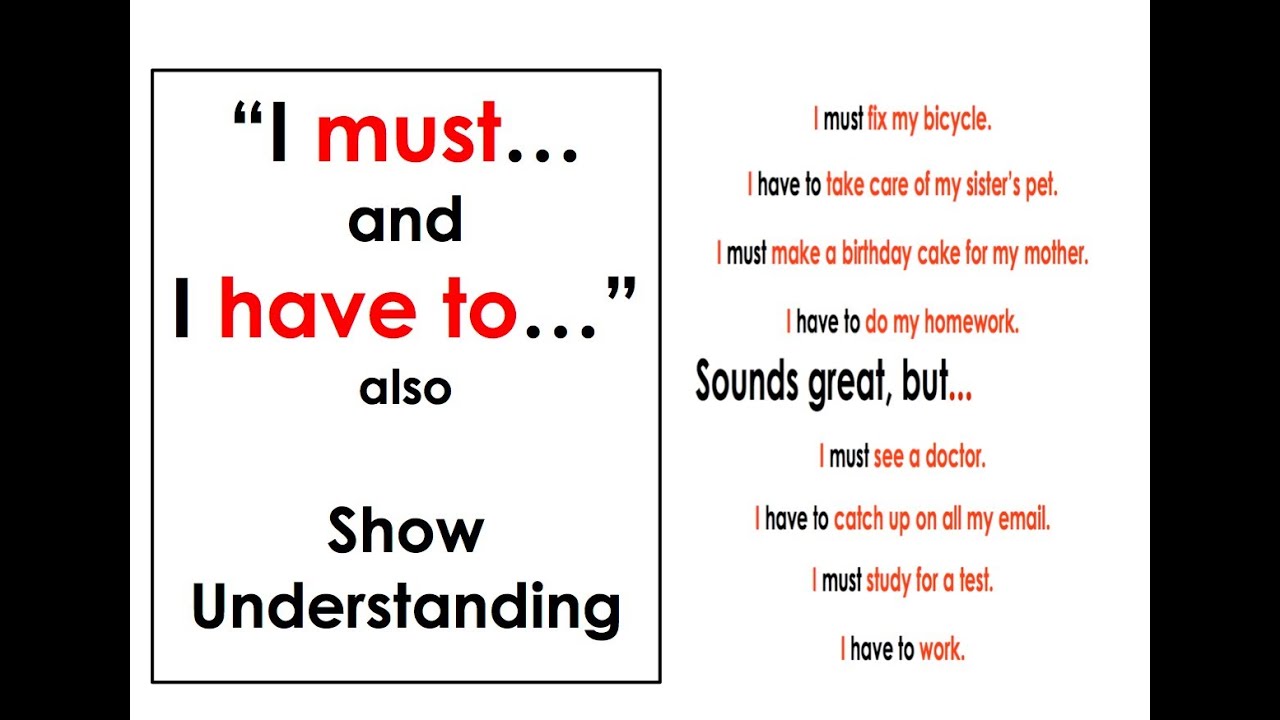 When we talk about things that are generally or always true, we can use:

Note that we are not talking about a specific event but something which is generally true.

In the condition clause, we can use a variety of present forms. In the result clause, there can only be the present simple or imperative.

Notice that ‘unless’ means the same as ‘if not’.

This year we listen, sing and learn this Christmas carol:

You better watch out

He’s making a list
And checking it twice;
He’s gonna find out
Who’s naughty or nice
Santa Claus is coming to town

He sees you when you’re sleeping
He knows when you’re awake
He knows if you’ve been bad or good
So be good for goodness sake! 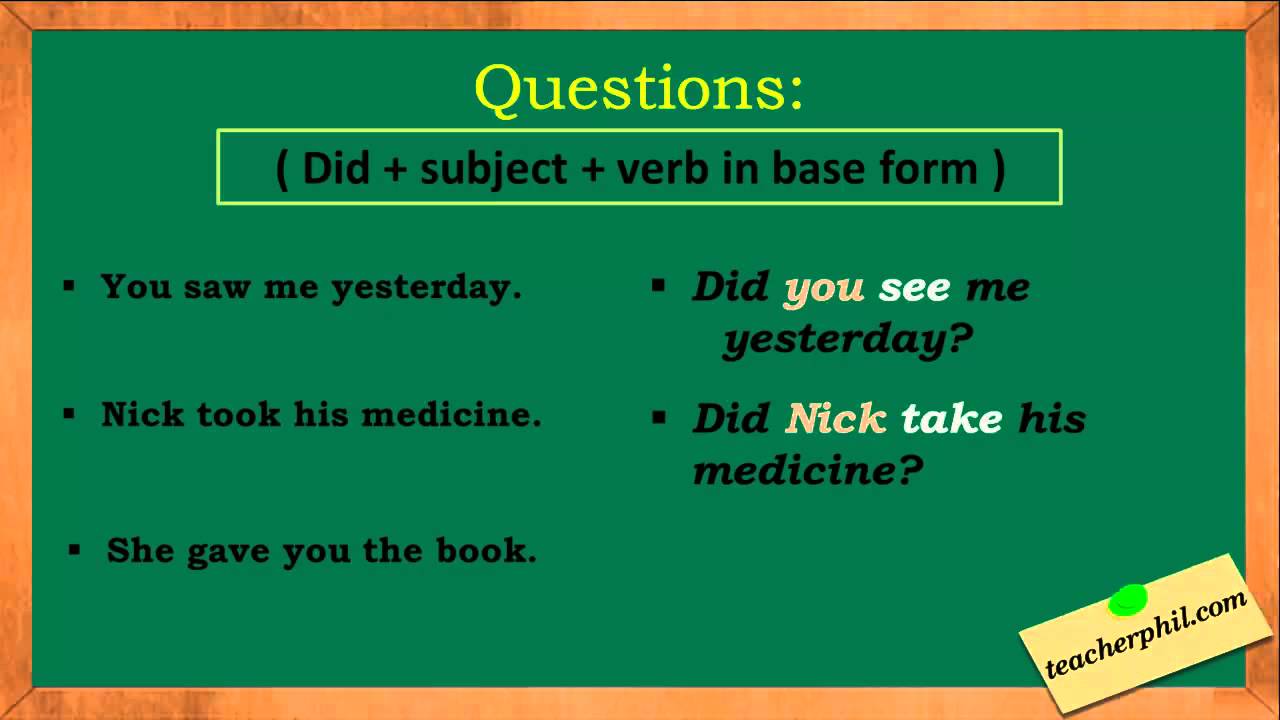 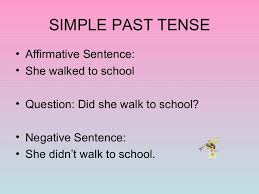 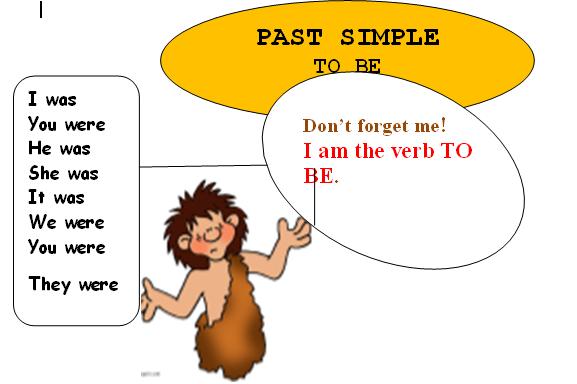 To Be – Negative Sentences

The negative of To Be can be made by adding not after the verb (was or were).

To Be – Negative Contractions

The can make negative contractions of the verb To Be in the Past tense by joining the verb (was or were) and n’t(e.g. were not = weren’t). We don’t make a contraction of the subject and the verb (e.g. I was).

To create questions with To Be, you put the Verb before the Subject.

Before the verb you can also have a WH- Question word (Why, Who, What, Where etc.)

Were you happy? Yes, I was.

Why were you happy? Because I was promoted at work.

To Be – Short Answers

In spoken English, we usually give short answers in response to questions.

Was he from Japan? – Yes, he was (from Japan). The last part (from Japan) is not necessary. We use shorts answers to avoid repetition, when the meaning is clear.

** With To Be, We don’t use contractions in affirmative short answers.

TO BE in the Past Tense – Summary Chart 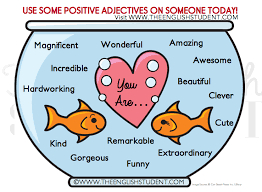 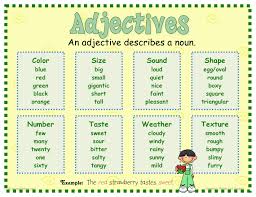 Play with this web:

The list of adjectives is something of wonder. Behold the modest adjective. It can leap tall buildings in a single bound. It makes the average citizen smarter and kinder. It keeps you in the cleanest car on the block. Such potent words should be used wisely. Read on and learn how to use your adjective powers for good.

An adjective’s job is to modify a noun or pronoun. They are always near the noun or pronoun they are describing. Be careful how you use adjectives such as interesting, beautiful, great, wonderful, or exciting. Many adjectives like these are overused and add little definition to a sentence. Instead, show your reader or listener what you are talking about by using verbs and nouns creatively. Sprinkle fewer well-chosen adjectives for interest.

Adjectives are often used to describe the degree of modification.

The adjective forms are positive, comparative, and superlative.

This tree is tall. (positive)
That tree is taller. (comparative)
The last tree in the row is the tallest. (superlative)

A handful of adjectives have irregular forms of positive, comparative, and superlative usage.

My lunch was good, hers was better, and yours was the best.

The following lists are just a sampling of adjectives in the English language. They are categorized by the type of attribute they describe. Use your dictionary or thesaurus to add to each list or use the complete list below this one. 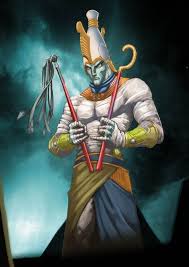 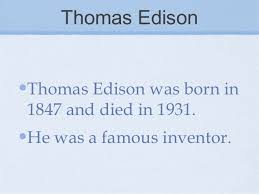